The following article was contributed by Carter-Riverside neighbor Rick Herring: 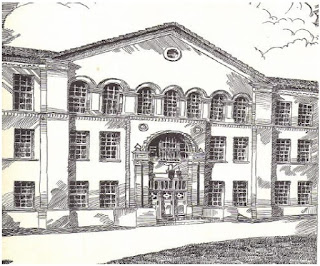 It may be historic to us, but once upon a time it was new
by Rick Herring

80 years ago - August, 1935 - a sunrise breakfast and groundbreaking ceremony celebrated the beginning of construction on a new high school in Riverside, the school we know and love today as Amon Carter Riverside High School. The whole community was awakened on that momentous day by a "long, shrill train whistle, guaranteed to wake everybody in Riverside" at 5 a.m., followed by "modern-day town criers and Paul Reveres" who traveled the streets of Riverside honking horns, blowing whistles and ringing cow bells. All of this to summon the community to a grand celebration being jointly sponsored by the Riverside Civic League, Riverside PTA, and Oakhurst PTA. Boy Scouts were told to assemble in their uniforms at Scott’s Drug Store at Six Points no later than 5:30 a.m. and then march carrying the colors to the site of the new high school at Yucca Avenue and Frey Avenue (now Riverside Drive) where they were to light hundreds of camp fires prepared beforehand. The high school site was lined with 400 flags. The following excerpts are taken from a newspaper article that reported the day’s events:

"Several thousand Riverside residents, together with guests from other sections of Fort Worth, mixed sand with their bacon and eggs this morning at ground breaking ceremonies for the new Riverside senior high school, estimated to cost $400,000."

"A hundred camp fires were lighted soon after sunup and in a few minutes the smell of frying bacon and eggs permeated the 40-acre site on which the school is to be built. Coffee was served from huge urns provided by the Riverside Civic League, which has taken a leading part in assuring the school."

"A hundred or more civic leaders of Riverside and other parts of Fort Worth were introduced and some of them made talks. Then Mrs. May Royster, who has taught school in Riverside longer than anyone else…turned the first spade of dirt, while George B.Eagle, school board member from the Riverside section, and Mrs. W.G.Phillips, wife of the civic league president, assisted."

"…W.M. Green, school superintendent…announced [the] first classes would be held in the building in September, 1936…. When [it was] announced that construction would start within 24 hours, the crowd applauded."

"Mother Ingraham (Mrs. F. A. Ingraham), first president of the Riverside PTA, [was] presented a bouquet of flowers…. Sam Losh led the crowd in a sing-song…Boy Scouts had charge of a flag-raising ceremony while a bugler blew reveille."

Riverside leaders fought for years to get a high school back in Riverside. When a school board commissioned study recommended a new junior-senior high school for Riverside in 1933, the community went to work and collected over 1,500 signatures of qualified voters from Riverside, enough to persuade the school board to call a bond election for the erection of new schools. A bond program of $3,000,000 was passed and an additional $4,000,000 was secured from the federal Public Works Administration.

Given the fact that Riverside took the lead in starting the chain of events that led to the building program, and that the new Riverside High School was to be the first high school constructed under the program, Riverside leaders were determined to put on a grand celebration. A committee of 190 persons had charge of the plans and the day before the groundbreaking the press reported that "Riverside today will hum with last minute preparations for what promises to be the most gigantic celebration in a section of the city known for its enthusiastic support of civic enterprises".

Thanks to these Riverside "pioneers", we have a beautiful building and campus to claim as our alma mater and center of our community.

Research and text by Rick Herring, copyright 2015. Used with permission.