Our 10th Annual Oakhurst Collective Garage Sale is upon us!  This event runs Friday through Sunday and draws shoppers from all over the area.  Many of our neighbors are participating, so we've put together a handy flyer of street addresses that you are welcome to save or print out for reference.  Also check out the location map below!


So c'mon out, hunt for bargains, and meet your neighbors this weekend.  Hope to see there!
10th Annual Oakhurst Collective Garage Sale
Memorial Day Weekend:  May 23-25, 2014
No comments: 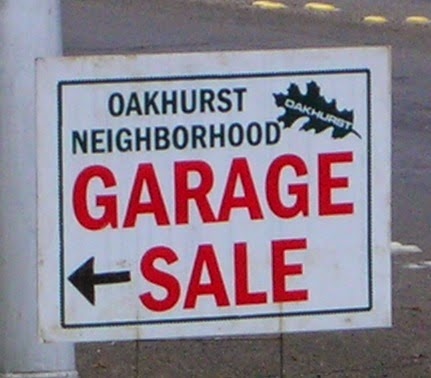 Members adopted the budget for 2014-2015, including an ambitious beautification budget which will fund plantings, watering, and maintenance at the Daisy Lane/Sylvania common area, Audine’s Circle, and the common area at West Lotus. In addition, an expense of $2,500 in capital improvement funds was approved for the installation of permanent irrigation equipment at the West Lotus site.

Members also enjoyed a slide presentation with historic photos of Oakhurst through its 90 years, dating back to its first development in 1924. Residents who have lived in Oakhurst for at
least 50 years were honored, including: CeCe Thompson; Hermina Cihacek (70 years); Ray
Jefferson (84 years); Robert Gieb; Jean and Terry Smith; Beverly and Dwight Mason; Susie McKinzie; Jerry and Shirley Howard; and Lee and Joe Gorbett.

Throughout 2014, ONA will continue to honor our long-time residents. If you know of a 50-year+ neighbor whose name does not appear above, please let us know at oakhurstfw@sbcglobal.net or via the Contact Us form on this website.
No comments: