Get Your July Oak Leaflet!

This month's issue of The Oak Leaflet is now online.  This month's edition recalls the "Liberty Bell" parade of 1915, features Chanin's President's Message, highlights July's Yard of the Month, recaps the Memorial Day Service at Mount Olivet, and includes a summary of proposed changes to the ONA bylaws.  Look closely and you'll even find a recipe from Phyllis for peanut butter cookies! 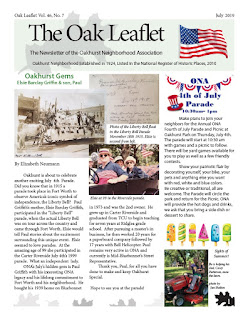 Also be sure to check out upcoming activities and events, including info on our upcoming 4th of July Parade!

As always, you may visit our newsletter archive to view or download past issues.
No comments:

A special general membership meeting of the Oakhurst Neighborhood Association will take place on Thursday, June 13th, at 6:30 pm in the Calvary Christian Academy cafeteria.

Speakers for the meeting will include David Collyer, presenting the Audit Committee report; Neighborhood Police Officer Doug Gilfour, who will address the uptick in gunfire and garbage dumping along Watauga and Oakhurst Scenic; and representative(s) from the City of Fort Worth, who will present "City Hall 101", a briefing on city departments and what they do.

Attendees will also be voting on a proposed sign variance (read it here).  The variance has been withdrawn by the applicant, as the owner will have to go through the zoning commission and City Council to amend the PD to allow for the proposed sign, rather than just getting a variance.  However, ONA's vote will alert the City to Oakhurst's position on the matter.
No comments: