You're a Good Man, Charlie Brown! 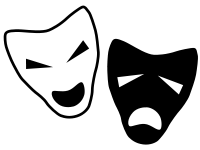 There is new energy percolating in the Amon Carter-Riverside High School drama program in the form of drama teacher Clyde Berry.

He wrote to tell us about the drama program's upcoming production, You're a Good Man, Charlie Brown! You can see the play in the school's historic auditorium at 3301 Yucca Avenue on the following dates:

All seats are just $5.00 at the door. Cast info is available here.

Berry writes, "The show is about the famous comic strip characters created by Charles Schulz. It includes Charlie and Sally Brown, Lucy and Linus Van Pelt, Schroeder, and Snoopy. It follows a year/day in the life of Charlie Brown.

In the Spring, we will be producing the Regional Premiere of Steel Magnolias in Spanish. We will also have a week of performances in English. We will be partnering with Texas Weslyan and DVA productions on this show."

Hope to see you at the show!